This month, rather than a single word, we want to introduce you to an entire group of words (some of which might be helpful in Scrabble, since they make use of the letter Z!), starting with the word for which this post is titled: zebroid.

If you were forced to guess the meaning of the word zebroid, what would you guess? An asteroid inhabited by zebras? Something that is zebra-like?

The second guess is (not surprisingly) the closer guess. A zebroid is an animal which is the offspring of a zebra with any other equine animal. 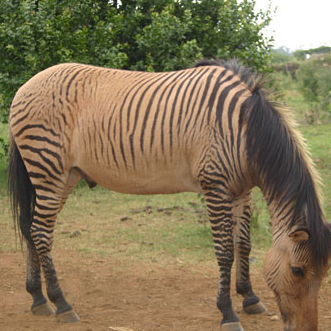 Not surprisingly, like the mule, most zebroids are infertile. Also, zebroids are prone to dwarfism. They are occasionally bred for riding and work, but like their zebra parent, zebroids can be very temperamental and aggressive. Zebroids are also bred for showing in circuses and carnivals.

Okay, now for the fun part...depending on what species the zebra is bred with, and depending on which parent is the sire, zebroids have many different names. You might want to jot these down and see if you can get away with using them in Scrabble sometime...