Yearly archive for 2015.
Refugee
Posted by Portland Proof on December 1, 2015

This month we have selected a Christmas-themed word as our Word of the Month. Refugee.

"What are you talking about?" you might say. "Refugee is not a Christmas word! Christmas words are happy words like celebrate, or yuletide, or maybe caroling! Refugee is a sad word, and has no place in the holiday season!"

Ah, but it does! When the Christmas story is retold and celebrated around the world, we most often sing carols that talk about baby Jesus peacefully sleeping in the manger with Mary and Joseph nearby, or shepherds watching their flocks, or wise men following a star. These are the happy, picturesque scenes that form the backdrop of our celebrations, and the cover illustrations of our greeting cards.

But there is an old carol (first written record of the carol puts it in the 1500s) that we don't sing very much -- and when we hear it, it's most often an instrumental rather than vocal piece, because nobody wants to sing such sad words during a season of celebration.

Herod the King, in his raging
Charged he hath this day
His men of might in his own sight
All children young, to slay

Then woe is me, poor child, for Thee
And ever mourn and say
For Thy parting nor say, nor sing
Bye-bye lully, lullay

You see, the Christmas season wasn't all happiness and joy; when the wise men went back to their homeland without returning to file a report with Herod the king, Herod -- in a fit of both rage and fear -- ordered the infamous infanticide we refer to as the "Slaughter of the Innocents" -- all male children in Bethlehem under the age of two were killed by Herod's soldiers.

And how did the young child Jesus escape this horror? The gospel of Matthew records that an angel appeared to Joseph: "'Get up,' he said, 'take the child and his mother and escape to Egypt. Stay there until I tell you, for Herod is going to search for the child to kill him.' So he got up, took the child and his mother during the night and left for Egypt, where he stayed until the death of Herod."

So, although we don't tend to think of Him this way, Jesus was a refugee. The plight of Jesus was very similar to the plight of all refugees -- people who have left their homeland, seeking a place of refuge, because their home has become unsafe for them.

That is, by the way, the origin of the word refugee -- a refugee is someone who is seeking refuge.

Like Jesus's family, many refugees are waiting in hope that someday their own land will be safe to return to. For some, the wait is short, but for others, the wait can be decades. And for others that hope of return is never realized.

In the gospels, Jesus is recorded as saying, "Whatever you have done to the least of these, you've done it for me." It is no wonder that one who was once a refugee himself would have great compassion for the downtrodden of this world.

As we celebrate the Christmas season this year, let us not forget those who -- like the Christ child -- know what it means to be chased out of their homeland.

I would like to close this blog post with a poem which was written by Henry van Dyke (van Dyke is best known for penning the words to "Joyful, Joyful, We Adore Thee," and "The Story of the Other Wiseman.") We have recorded this poem as a song, and created a video from it. You can view the video here: Thou Wayfaring Jesus.

Thou wayfaring Jesus, a pilgrim and stranger
Exiled from heaven by love at Thy birth
Exiled again from Thy rest in the manger
A fugitive child 'mid the perils of earth.

Cheer with thy fellowship all who are weary
Wandering far from the land that they love
Guide every heart that is homeless and dreary
Safe to its home in Thy presence above.

Today we'll begin with a test. Look at the picture below, and tell me... is it a xylophone? Or a glockenspiel? Or something else? 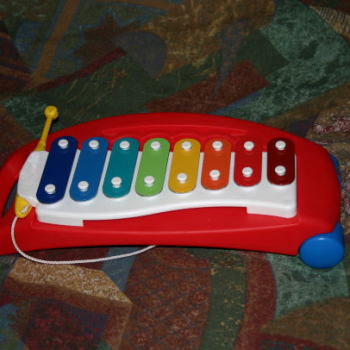 This was actually an unfair test, because I deliberately chose a picture of a child's toy, and everyone knows that those things are xylophones -- they say so right on the package!

The truth is, despite the fact that the toy's packaging probably said, "Toy Xylophone," this is not a xylophone at all (though it is a toy).

This is a glockenspiel.

So what is the difference? The difference is in the material used to make the bars. If the bars are made of metal, the instrument is a glockenspiel. If they are made of wood, it is a xylophone.

And where does the marimba fit into all of this?

A marimba is like a xylophone, except that it has resonating tubes under the wooden bars, which amplify the sound. Marimbas tend to be lower pitched instruments than xylophones.

While all of this might be interesting, none of it helps us remember whether a xylophone is metal or wood.

It would be obvious, if only we had been taught the Greek-origin prefix "xylo," which simply means "pertaining to wood." It would also be obvious if we knew that a coconut is a xylocarp because it has a "woody" shell. Or if we knew that xylotomy is the microscopic study of wood. Or if we knew that xyloid is a synonym for "woody." Or if we remembered from biology class that xylem is one of the types of transport tissue in vascular plants (such as trees). Unfortunately, none of these "xylo" words are well known.

So maybe this will help: A glockenspiel is the only kind of glock you should ever give a child.

This month, rather than a single word, we want to introduce you to an entire group of words (some of which might be helpful in Scrabble, since they make use of the letter Z!), starting with the word for which this post is titled: zebroid.

If you were forced to guess the meaning of the word zebroid, what would you guess? An asteroid inhabited by zebras? Something that is zebra-like?

The second guess is (not surprisingly) the closer guess. A zebroid is an animal which is the offspring of a zebra with any other equine animal.

Not surprisingly, like the mule, most zebroids are infertile. Also, zebroids are prone to dwarfism. They are occasionally bred for riding and work, but like their zebra parent, zebroids can be very temperamental and aggressive. Zebroids are also bred for showing in circuses and carnivals.

Okay, now for the fun part...depending on what species the zebra is bred with, and depending on which parent is the sire, zebroids have many different names. You might want to jot these down and see if you can get away with using them in Scrabble sometime...

We took a short break from the blog for the summer, but we're back this month with a post to help students celebrate their return to school. This month's word is especially for students (and teachers) who love obscure mathematical terminology. The word is quaquadrate, and it comes from a 1701 text by Samuel Jeake, titled A Compleat Body of Arithmetick, in Four Books.

Whoops! I'm sorry - typography was a bit different back in 1701. That should have read: "a square of squares, squarely squared."

Does that clear things up for you? No?

Well, a simpler explanation is that it's a sixteenth power. 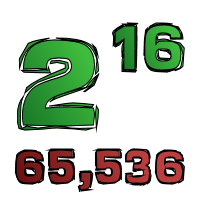 Of course, I'm not sure why you would want to do this. Saying "two squared" is significantly shorter than saying "two to the second," but there's no savings in saying "two quaquadrated"; it has has exactly as many syllables as "two to the sixteenth."

Besides, "two to the sixteenth" rolls off the tongue a lot more easily than "two quaquadrated."

But if you want to impress your math geek friends, then by all means try to work this word, along with its companion words (biquadrated, triquadrated, and quinquadrated) into your everyday conversations.

I'm sure they'll be impressed.

Last month there was an accident in front of our home. Someone apparently fell asleep at the wheel, and drifted across the center line, into the path of an 18-wheeler.

No one was hurt, but the car was demolished, and the 18-wheeler became a 16-wheeler. It was quite a sight to see. And everyone wanted to see it! There was an awful lot of rubbernecking going on!

Rubbernecking is a fun word that simply means that you are twisting your neck around (as though it were made of rubber) in order to see something interesting. Rubbernecking is a word that is most often used to describe what happens as cars drive by accident scenes. And it's generally frowned upon; rubbernecking can make bad accidents even worse. 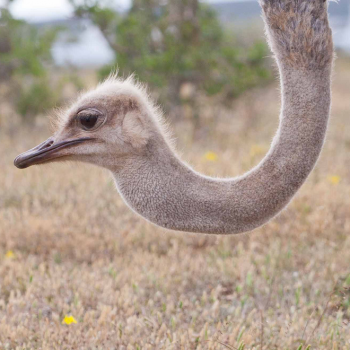 But of course, it can be used in other situations; perhaps you can think of some?

And no, contrary to what you might have supposed, rubbernecking is not what happens when Gumby and his girlfriend are making out.