Pabulum and its synonym pablum are unusual words which have vastly different (and potentially contradictory) meanings, depending on the context.

Pabulum is a Latin word which means "foodstuff." Pablum is an abbreviated form of the word, which is the trademarked name for a type of baby food.

So if you see "Pablum" instead of "pabulum," there's a good chance it may be referring to this particular type of baby food.

So how is the word "pabulum" used? Well, if you consult a medical dictionary, you will find that it refers to a type of food which can be eaten with very little effort--a suspension of nutrients in a liquid.

Outside the medical world, pabulum can have the meaning "intellectual nourishment," and this is where the definitions can get contradictory. 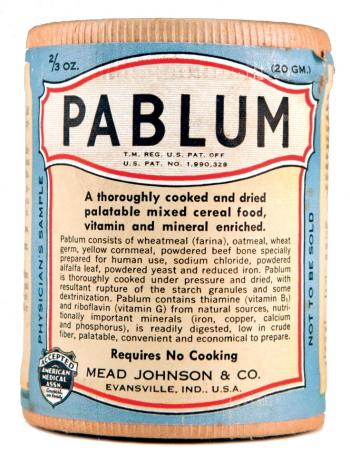 It reminds me of what the Apostle Paul said in the book of I Corinthians: "I have fed you with milk, and not with meat: for hitherto ye were not able to bear it, neither yet now are ye able." (I Corinthians 3:2). Basically Paul is saying, "I'm stuck feeding you pabulum, because you're not ready for anything more profound."