It's getting toward the end of the month, and I was trying to think of a good word to write about for the blog, and suddenly, I had an epiphany! Have you ever had an epiphany? If you've ever had a sudden flash of insight or realization, then yes, you've had an epiphany.

If you want to understand the word epiphany, you should remember that old story of Archimedes, jumping out of the bathtub and running down the streets of Syracuse, shouting "Eureka! Eureka!" because he had suddenly realized that a bathtub (and the water it contained) could be a wonderful tool for determining the volume of an object.

Mind you, an epiphany does not require you to shout "eureka," and it also doesn't require you to run down the streets of the city in your bath-time wardrobe. But it is -- like Archimedes' realization -- a sudden, startling insight. 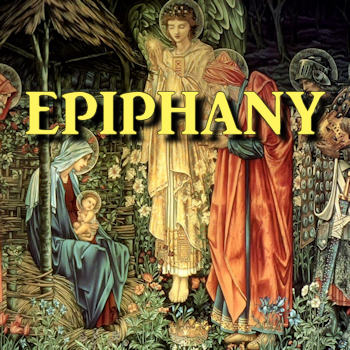 The word epiphany comes to us from Greek, by way of Old French and Latin. The Greek word was epiphainein, and it simply meant "reveal." This definition fits nicely with our modern understanding of the word; when we have a flash of insight, we often have the feeling that the answer has been there all along, but it was hidden from us -- right up until the moment it was revealed.

Epiphany is also a "December word" -- in the sense that it is closely tied to the Christian Advent season. The Greek word epiphainÅ, (another form of the Greek word mentioned above) appears in the book of Titus chapter 2, in the following contexts:

Titus 2:11 -- "For the grace of God that bringeth salvation hath appeared to all men."

Titus 2:13 -- "Looking for that blessed hope, and the glorious appearing of the great God and our Saviour Jesus Christ."

These two verses encapsulate one of the main themes of the Advent celebration -- that The Christ appeared (was revealed), and that he will appear (be revealed) again.

After Christmas, the holiday of the "Three Kings" is celebrated. This holiday is also called "Epiphany," because it represents the revealing of the child to the kings of this world. In the eastern tradition, the holiday celebrates the baptism of Christ, because it was his revealing to the people of Israel.

As one last bit of Christmasy trivia, Bishop Nicholaus of Myra (the man we typically refer to as Santa Claus), was a 3rd century man who lived in Asia Minor. His father's name was Epiphanius, which is, of course, a variation on the word epiphainÅ.

May your Christmas season be filled with epiphanies!

This month's Word of the Month is "contrapositive." If you've ever taken a course in geometry or logic, you've likely heard the word "contrapositive" before. One definition of contrapositive is: "The contrapositive of a conditional statement is formed by negating both the hypothesis and the conclusion, and then interchanging the resulting negations."

That's a reasonable definition, but if your logic course isn't fresh in your mind, it might not mean much. So let's break it down into pieces that are a little more manageable.

The conclusions are:
The ground is white
x + 2 = 5
It's time to get your clock fixed.

With that in mind, we can determine the contrapositve of each statement. We swap the order of the hypothesis and the conclusion, and then write the opposite of each.

Let's look at the third example: If the clock strikes 13 then it's time to get your clock fixed.

The opposite of the hypothesis is "The clock does not strike 13" and the opposite of the conclusion is "It's not time to get your clock fixed." If we now swap the order of these in the original statement, we get the following:

If it's not time to get your clock fixed, then your clock did not strike 13.

Can you find the contrapositives of the other two examples?

While you're trying to work out those contrapositives (the answers are posted below), it is interesting to break the word down into its component parts:

So a contrapositive is a statement which is in contrast to an argued statement.

And finally, here are your other two contrapositives:

If you see with your eyes, speak with words, or eat tuna fish in a safe haven, then maybe it's possible you're indulging in pleonasms.

What's a pleonasm? A pleonasm is when you use more words than are necessary for clear expression. For example, you don't usually need to specify that you're using your eyes to see, or words to speak. We all know that a tuna is a fish without being told, and havens are - by definition - safe. Furthermore, maybe and possible carry the same meaning, so one of them could be left out.

To use another pleonasm, a pleonasm is a repetitive redundancy.

Pleonasms crop up all over the place, and usually we don't even notice them. We all have seen terms and conditions, or have heard that something was declared null and void.

Every time you open a Bible and read from the book of Psalms or Proverbs, you are reading a form of pleonasm, since ancient Hebrew poetry was often written in couplets that have a "rhymed" meaning. For example (from Psalm 2):

He who sits in the heavens laughs,
The Lord scoffs at them.

The pleonasm is used here either to refine or to emphasize a particular meaning. Obviously, this is not always a bad thing. Authors, teachers, preachers, and other communicators may use pleonasms for dramatic effect or to drive a point home. In fact, if we completely remove pleonasms from our speech and writing, what is left can sometimes feel stilted and unnatural.

Speaking of "stilted" and "unnatural," those words are synonyms; did you notice that pleonasm?

Blog subscription
Olives and the Sahara
Posted by Portland Proof on September 1, 2016

This month, instead of one "word of the month," we have two. The words are "olive" and "Sahara." We chose these words in tandem not because olives trees are native to the Sahara region, but because they have something else in common besides geography. I'll leave you to ponder what that might be for a moment, and while you're pondering, I'll share their word origin stories. 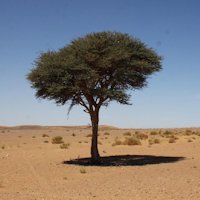 The word "olive" comes to us from a lengthy sequence of words starting with Greek, then Latin, then Old French, and finally English. The word sequence for olive looks something like this:

Are you curious to know what "eliaon" means? It means "oil." And doesn't that make sense? We get oil from olives (and by the way, it's very healthy stuff, too).

That's the word history for olive, but what about Sahara?

Well, Sahara has a much shorter word origin story; it comes to us directly from an Arabic word that means "desert" or "great desert."

So, have you figured out what these two words have in common? Here it is: They both are parts of common phrases that are linguistically redundant.

When you say "olive oil," you are, in a sense, saying "oil oil." And when you say "Sahara desert," you're really saying "desert desert."

Of course, both of these are acceptable phrases to use. The first one is acceptable because, even though it comes from a word that means "oil," the word "olive" doesn't actually mean "oil." Similarly, even though "Sahara" means "desert," it has also become a proper noun that refers to a specific region of the world, and the desert that region contains. Thus, "Sahara desert," while it may be frowned on in some circles, is still considered an acceptable usage. To satisfy my own doubts on the matter, I did a bit of searching online, and found -- among other reputable sites -- a National Geographic encyclopedia entry which refers to "The Sahara Desert."

I'm not going to argue with National Geographic on that one.

Blog subscription
Anomia
Posted by Portland Proof on May 1, 2016

Anomia is a form of aphasia (aphasia is a speech/language disorder). Anomic aphasia is the most common form of aphasia. It is the inability to recall words you want to use when speaking. Nouns and verbs are typically the words which cannot be recalled.

So if you are ever talking to someone and they say to you, "I went to the pet store and I bought a...," and then they start waving or  motioning with their hands, as though they're either trying to stall for time or play charades, and then they finish the sentence by saying, "...one of those furry four legged-things that says 'Meow,'" it's possible you may be talking to someone with anomia.

But anomia is also an animal classification? Yes it is. Anomia is a genus of bivalve mollusks. They are salt-water clams. They are also known by the less scientific-sounding nickname "jingle shells." Apparently, if you have several of these clamshells, and you shake them together, they make a jingling sound.

It's the perfect distraction for when you can't think of the word you want to say.

Or you could just clam up.