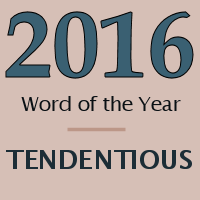 The word is tendentious. When I hear this word, I automatically think of the word "contentious." Tendentious doesn't mean the same thing as contentious, but as you will see, tendentiousness tends to lead to contentiousness.

The root of tendentious is the word tendency. We have a tendency to accept and promote information that fits with our pre-existing viewpoints. An online thesaurus lists "prejudicial," "one-sided," and "partisan" as synonyms. "Biased" would be another synonym.

This has certainly been a perfect year for tendentiousness. Aside from the unavoidable bias implicit in the choice of what is important enough to print, this year has seen a massive proliferation of both right-wing and left-wing media sources that have absolutely no interest in posting anything that doesn't promote their pre-existing views. Did a liberal politician do something wonderful? Don't expect to see a word about it on any right-wing site. Did he do something horrible? Don't expect to read it in a left-wing source. (And by the way, if he did do or say something wonderful, right-wing media sources will find a way to take it out of context and make it sound horrible!) It's important for all of us to learn to notice and acknowledge this when it happens, even and especially when it happens on our own "side."

And it's not just corporate media. With the ever-increasing usage of social media platforms, every one of us is now a media source. We can't complain about "corporate media bias" when we are guilty of exactly the same sins -- to an even greater degree. We see tweets and Facebook memes and we assume they must be true solely on the basis that they fit our pre-existing notions. Since they fit our ideas, we automatically retweet or share, without a moment's hesitation or reflection. And certainly without any research.

Woe unto the social media user who decides to challenge these postings with a, "Wait a minute. That's not even true!" comment. The response to "that's not true" is almost always a variation on "but they make a good point," and a refusal to remove the false content from their personal media platform.

In one of the greatest ironies of the year, people who defend the importance of truth amidst the onslaught of media fiction seem to be just as often accused of tendentiousness. I find nothing more depressing than my friends on one side of the political spectrum claiming that concern about the proliferation of "fake news" is a partisan invention of the other side. In other words, opposition to tendentiousness is seen as tendentious.

All of this tendentiousness leads to more and more contentiousness.

After selecting our 2016 Word of the Year, we learned that the Oxford Dictionary has selected "post-truth" as its word of the year. We think our word and theirs fit well together.